Are there rooms you can, but you shouldn’t or dare to visit?

A miniature model of a room stands in a relation to an idea of a world, therefore it can never be contextless. The room can be a way to give us perspective or a deeper understanding that can easier be reached when looking from a distance, it diminishes and magnifies. As a visitor to the show “Beyond your World” you will have wide different references to what you see. Miniatures evoke references to children’s games and imaginative pretend that we enjoy. It is a world that allows us to decide and gain control and at the same time triggers our imagination. But is there also something dangerous about that perspective? What does a scale model / diorama of an isolation room at an institution for young adults tell, or a scale model of Anders Behring Breivik’s bedroom at his mother’s place, in which he planned his awful deeds? To paraphrase Nietzsche: For when you gaze long into a room. The room gazes also into you.

But the exhibition “Beyond your World” is not primarily an exhibition about miniatures. It’s an exhibition about estrangement, voluntary or forced. To isolate oneself or become isolated. To distance oneself because one feels hatred towards others, or because one feels hated. The miniature room forces and seduces the viewer to perceive from a distance. Even when macabre and heartbreaking scenes in the form of miniatures seem to give a more secure opportunity to study independent scenes. Seemingly estrangement can accommodate a spectrum of emotions, from freedom and independence, to indifference and bitterness. Can the room reveal something about the person or people who feel alienated or live in a forced or voluntary exclusion? The one who is excluded, or is excluding, also has a picture of what it means to be included. Do not forget that when watching from the outside.

Jacqueline Forzelius (b. 1982) lives and works in Gothenburg. She has a bachelor’s degree in Fine Arts from the Bergen Academy of the Arts KHIB and a master’s degree in  Fine Arts from the Piet Zwart Institute in Rotterdam. Since 2004, she has mainly worked with performance and video, with participation in exhibitions such as Videonale in Bonn, Total Liquidacion in Madrid, Høstutstillingen Statens kunstutstilling in Oslo. In recent years, she has also started working with dioraman and this is her first major showing of that work. 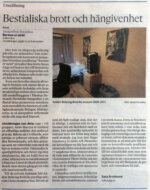