Tenthaus artist collective would like you to come and see the results of a moment of trust between Gothenburg’s visual artists and people learning Swedish at «SFI» language school. Local artists have been asked to personally deliver their works to Galleri Box. There, a language class awaits, each student paired up with an artist to unpack and install the art.

Tenthaus Winter Depot mimics the storage space of a larger museum, the shelving units dominate the space. In a depot, material is received, classified, stored, accounted for, issued, maintained, procured, manufactured, assembled, researched, salvaged and disposed of. This notion suggests both transition and storage, where the given perimeters for exhibiting these smaller scale art works are not ones that optimize the works on show, but present the potential of each piece.

Tenthaus Winter Depot aims to create a different kind of meeting between artist and public outside the set prescription of exhibition opening or artist talk. Tenthaus Oslo artist collective opens up for dialogue in another zone, one outside exhibition conventions where the artist hands over her work to a non-expert, not necessarily with an arts background. They are intrigued and excited about the possibilities that this scenario will throw back at them. What can happen when two strangers engage in this project? What will these meetings reveal about the gallery format and the differing roles that these newly formed constellations? How will the set structure of the shelves affect installation when relating to art practice? What will the theme of the conversations be?

The shelving units, were originally part of an artwork by Stefan Schröder entitled Archive, my thoughts, your actions (2013) exhibited at the Vigeland Museum as part of the Norwegian Sculpture Biennial. In 2015, Tenthaus Oslo commissioned Rachel Dagnell to curate Spring Depot an exhibition that filled the shelves with works by artists working locally in Oslo. The concept has now been redeveloped to include Winter Depot at Galleri Box (2018) and Spring Depot 2018 at Tenthaus Oslo.

About Team Tenthaus:
Helen Eriksen, Ebba Moi and Stefan Schröder are artist based in Oslo who run the Tenthaus Oslo project space. Its profile is characterized by an open, process-oriented form of participation from an internationally orientated group of artists. The context of contemporary art practice is re-examined through a broader field of activity with exhibitions, workshops, artist’s talks and live performances 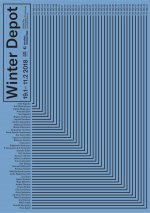