In the spring of 2014 Klara Källström and Thobias Fäldt, as well as countless before them, traveled from the US via Mexico to Cuba in the spirit of visiting the country before it was irrevocably changed. They had brought along analogue camera film that they feared was damaged by the x-rays of the US Security control, hence they started to search for new film in Havana.

Fortunately for them, in Havana, they met a man who turned out to be one of Fidel Castro’s former private photographers. He took them to a camera shop, where despite the general lack of photographic equipment in the city, there were three rolls of film baring the inscription “Lucky”. The salesman handed the rolls over and said: “these are the last rolls of Cuba”.

Soon after the rolls had been exposed, US president Barack Obama declared that the trade embargo against Cuba would be lifted. Since then film is no longer a rarity in Cuba, but what Klara and Thobias did not know at the time was that the photographs from the “Lucky” rolls would unintentionally capture a last glimpse of something entirely different.

In the spring of 2016, after a visit to Cuba by president Obama, a number of events set in motion an irriversible change. This is compiled by author Johannes Wahlström as a historical documentation, albeit with the perspective turned back towards the US. 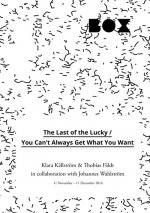